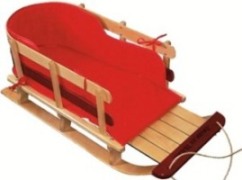 It was a painful experience. Just brutal. There was some consolation in the fact that it would be good blogging material later, but overall, it was quite nasty. I’m referring to our attempted Dad-drawn sleigh ride this morning.

‘Attempted’ is most definitely the key word here. And what an attempt it was. So let me just preface the story like this: we’ve got cabin fever really, really bad. It’s been snowy and it’s been cold. With these conditions, public transportation has struggled to maintain its reliability, and therefore Mom has had to use the car for commuting pretty much everyday. Since a foot and a half of snow fell nearly 10 days ago, I think Bean has been outside the walls of our home exactly one single time. We are a crew of caged animals here. I would not be surprised to see busloads of kids strolling past our windows, looking in while receiving strict instructions not to feed us. Not a good scenario, especially considering winter doesn’t even officially begin until tomorrow!

So the sleigh ride was my big idea of the morning. We have this cute little American Traders sleigh that Bear absolutely loved being pulled around in last winter. With temperatures at a manageable level today, I thought it would be a good chance to get out and get some air.

Commence the bundling up process. Bear is the even-keeled good-natured one, so she was first to be bundled. Snowpants, boots, gloves, jacket, hat, hood… no problem. Good to go.

Then came Bean. To characterize Bean as temperamental is a massive understatement. I love that girl to death, but she is downright difficult. Starting right away with the snowpants, it became an epic struggle. Crying, back arching, and all manners of escape attempts were executed. By the time I was able to somehow get her boots and jacket on, she was absolutely beside herself with whatever brand of seemingly irrational sadness and anger she was experiencing. The hat and mittens were thrown back in my face. At this point, I reason that since I’ve made it this far, I might as well just keep going. I bring the girls out the back door, hoping that the snow and fresh environment might distract Bean from her misery and calm her down enough to get the hat and mittens on.

Ha. The tantrum did nothing but intensify. Bean is not accustomed to walking around in her new winter boots, which admittedly are quite large. Each step she took brought on greater and greater unhappiness as she struggled to make forward progress and remain upright. Another attempt at donning hat and mittens goes horribly awry.

OK, I’m thinking, let’s just get out to the garage, get the sleigh down, and get Bean in the sleigh. Surely once she realizes how awesome it is to get off her bulky booted feet and be pulled around in the snow, a slow smile will materialize, stray tears will vanish, and she will have the time of her life.

Nope. More crying. Increased frustration. Bean, you are just killing me here. I had no other recourse but to cut our losses and abort our outing. “OK guys. This just isn’t going to work. Let’s go back inside.” Bear, who had up until this point been patiently watching the whole episode in silent awe, as if gawking at a roadside accident, now lost her mind. Now we’ve got double the tears, double the screaming, and double the good times.

Upon entering the house and removing our winter outerwear, both tantrums persist solidly. Bean sits and wails at the door, indicating that she wants to go back outside. Really, Bean? Really? Bear, whose tantrum I genuinely understand and actually feel quite bad about, just wants a lap to sit on and a shoulder to cry on. I promise her that tomorrow, with Mom home from work, I will take just her out on the sleigh and it will be fantastic. I try to initiate a rational conversation with Bean about her situation too. I am able to deduce that she does indeed have a strong loathing for the boots, and I assure her that we will not put them on again today.

In the end, they both came around. A good old-fashioned round of hugs and kisses smooths everything out, and we’re back to playing blocks together. Inside the house. Again. Maybe forever. I miss you, outside world.

I'm an architect-turned-stay-at-home-dad to three little daughters. Being an architect was hard. Being a full-time parent is RIDICULOUSLY hard. And equally as rewarding. Dadbloggit is a record of this journey.
View all posts by dadbloggit →
This entry was posted in Out and About and tagged children, family, humor, sleigh rides, tantrums, toddlers. Bookmark the permalink.

4 Responses to A One-Dad Open Sleigh