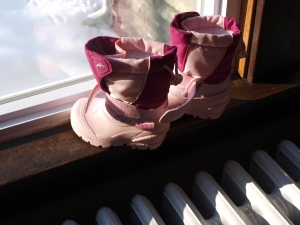 Bean's boots gaze longingly to out where they belong

You may recall from a previous post of mine that I’ve had some trouble getting the kids out into the winter wonderland. Specifically, Bean hates wearing boots, therefore none of us can go outside and play.

I was not willing to accept the prospect of an entire winter spent entirely indoors. I am a lover of the great outdoors, regardless of season, and there’s no way I’m going to let a pair of size six kids boots get in the way of me passing that love on to my children.

So I decided to try again. I started to really analyze what went wrong last time, and I’m afraid maybe I was a little too pushy. I just assumed Bean would be OK wearing boots, and so I put boots on her. In her mind, it must have seemed I was masterminding an arranged marriage between Bean and her boots. A forced relationship with an article of clothing she had never met before. A union that she simply would not accept.

As the matchmaker, I would have to try a different approach, something more gradual and Western. Early on Tuesday morning, I set out her boots in the living room amongst her toys. This was my way of very casually and informally re-introducing Bean to Boots. Initially she recoiled at the sight of them, but as she saw that I had no immediate intention of putting them on her, she relaxed.

The morning wore on, and I actually caught Bean interacting with Boots quite frequently. Courtship had begun. She would hold them up to me and say “Boots!” on occasion. She would stuff her little toy figures inside the boots in a scenario reminiscent of the fairy tale involving an old woman living in a shoe. I would ask “Do you want to try your boots on?” to which she would immediately reply “No”. Nonetheless, it seemed things were heading in a positive direction.

My next strategy was to have big sister model her boots to show Bean that a good relationship with a pair of boots was in fact possible. Bear was more than happy to put on her snowpants and boots and parade around the house. “See Bean? This is fun!” Bean pointed and said “Boots!” with a smile. This was my moment. I gently picked up Bean, put her in my lap, and with virtually no struggle at all, she was in her snowpants and… her boots!

At this point, we’re still not out in the snow, but a major victory has been claimed. We have a happy couple. This time, I allow Bean plenty of time indoors with her boots on so she can perfect her gait. She stumbles around, but ultimately she settles into a pattern of mobility that works. And without much incident, the next thing I know Bear and Bean are fully geared up, out in the backyard, and no one is crying (excluding my tears of joy, that is).

I get the sleigh down and ask Bear to sit down. I’m now realizing that Bean will have to sit in her sister’s lap to make this work, and for a second I think the whole plan will fall apart. Bean does not like to be that close to anyone other than Mom or Dad. She is especially mistrusting of her sister, and rightfully so. I place Bean in her sister’s lap and start pulling the sleigh, expecting the worse. But no – I see that it’s going to be OK. Bear has been loving the whole thing, and even Bean starts sporting that big smile I’ve been hoping for. I pull them around the entire park near our home, and Bean even started falling asleep at the end. Success! Winter is not looking so bleak after all.

I'm an architect-turned-stay-at-home-dad to three little daughters. Being an architect was hard. Being a full-time parent is RIDICULOUSLY hard. And equally as rewarding. Dadbloggit is a record of this journey.
View all posts by dadbloggit →
This entry was posted in Out and About and tagged children, family, humor, sleigh rides, toddlers. Bookmark the permalink.

3 Responses to Bean vs. Boots: Round 2